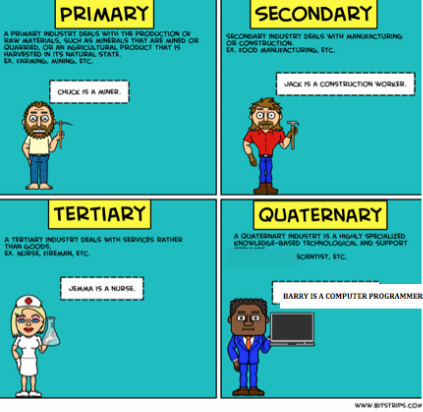 As the cartoon states there are four sectors of industry. The employment structure of a country refers to the percentage of workers employed in each sector. This pattern varies from country to country with development. The least developed countries are dominated by primary sector employment. As a country develops its primary employment falls and secondary and tertiary employment increase. The most developed countries of the world have low primary sector employment, falling employment in the secondary sector, high tertairy employment and a growing quaternary sector. However the pace of this change varies form country to country and also within countries. For example there is a significant difference in the employment structure of urban China compared to rural China. 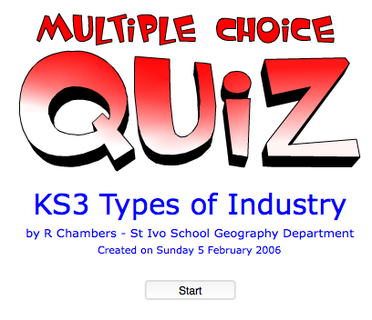 Changes with Employment Structure with development

The change of employment structure with development has already been described above.  The following graph shows this  change over time. 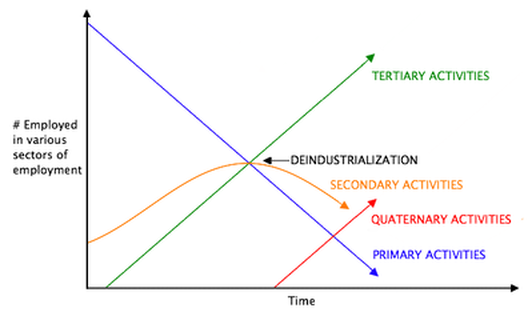 Activity
The following graph shows the employment structure of three countries at different stages of development (excluding the quaternary sector). At what point on the graph would you place each country? 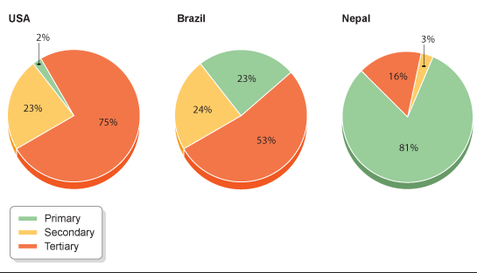 Activity
Now place the same data from the pie chats on this triangular graph
What are the limitations of this type of graph for the presenatation of employment structure? 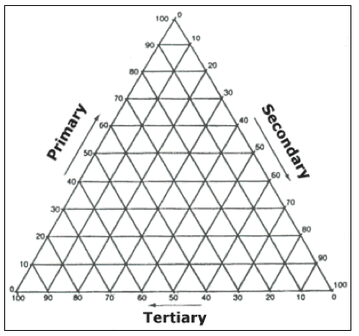 Differences within Countries
As countries rapidly develop they experience a divide between rural and urban employment. Urban areas with their natural location advantages become hubs for industry and trade. Rural areas due to their remoteness and lack of accessibility are slower to change and remain dominated by agriculture and other primary industries. This rural-urban divide is very present in both China and India today. The following graph shows the contrast in emplyment structure in India. Occ 1 is white collar workers and representative of services, Occ 2 are blue collar workers and representative of manufacturing, and Occ 3 is farming. What this graph does not show us is the number of workers making a living in the informal sector. 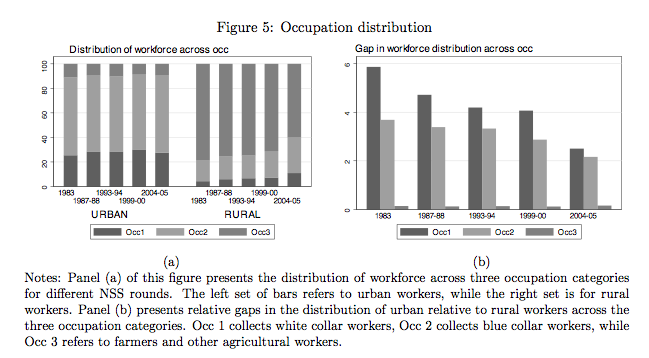 The following image shows the dominance of the informal sector in India. 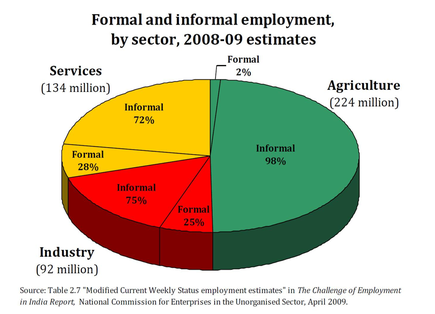 The following data taken from an employment strategy paper written by Ajit K. Ghose shows the changing nature of employment in Rural and Urban China. The data in brackets shows the distribution of employment as a percentage.

Case Study: A Comparison of Two Countries (HIC and LIC) and Changes in Employment Sector - UK and Vietnam

UK is considered a High Income Country (HIC) and has redeveloped a strong quaternary sector. Vietnam is considered an emerging economy, with a growing secondary sector.  I'm uncomfortable describing Vietnam as an LIC as it is really an MIC but the purpose of this comparision is to focus on sector shifts and most LIC haven't experienced it yet.  China and India are both experiencing sector shifts but they considered as rapidily developing economies and potential future superpowers, so I now think they should be avoided for this purpose
Explaining these changes
UK
The UK's ecomomy has been structurally changing since the 1970s with a movement away from heavy primary and secondary industries such as coal and steel. These industries couldn't compete with the lower costs and better quality imports. As a aconsequence industrial regions like South Wales and Newcastle in north east England fell into social and economic decline. Successive governments pushed for tertairy industry to fill the void. The financial sector growth led to many tele sale services as well call centres being located in old industriual zones  and with growing national wealth the service sector has continued to grow. With a highly educated population UK is a world leader in finance and technology-based quaternary industries. High tech clusters have emerged in a number of places in the UK with the M4 corridor being the biggest cluster of high tech companies in Europe. 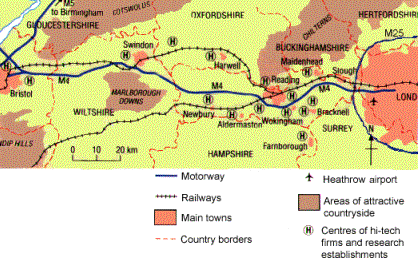 Vietnam
Vietnam is a development success story. Political and economic reforms launched in 1986 have transformed Vietnam from one of the poorest countries in the world, with per capita income below $100, to a lower middle income country within a quarter of a century, with per capita income of $1,130 by the end of 2010. According to the World Development Bank the ratio of population in poverty has fallen from 58 percent in 1993 to 14.5 percent in 2008.  In 1986, Vietnam launched a political and economic reform that introduced the transition from a centralised communist economy to a "socialist-oriented market economy."  The government gave incentives to private businesses and activley looked for foreign investment. By the late 1990s, the success of the business and agricultural reforms were very evident. More than 30,000 private businesses had been created and the economy was growing at an annual rate of more than 7%. A number of important factors have led to Vietnam's economic, these include:
The industrial heartbelts of Vietnam include Ho Chi Minh City, Hanoi and De Nan 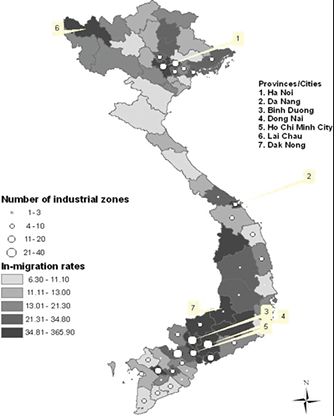 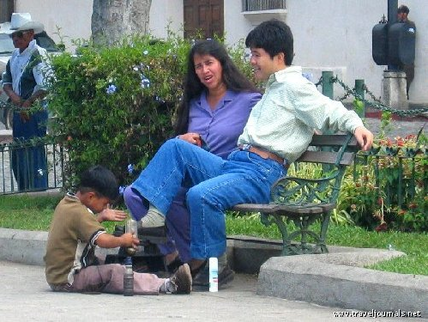 Informal employment refers to the unregulated and untaxed employment sector  that exists in all countries but is dominant in many Low Income Countries. Commonly known as the black market in western countries and considered illegal, in contrast it makes up the majority of industrial and commercial activity in LICs, without which many millions would struggle to exist. In LICs the informal sector is the economy in which the majority of people operate and it can form the majority part of all three sectors of industry, primary, secondary and tertiary. The young child shoe shining in Antigua, Guatamala to the left is simply providing a service within the informal sector.
Informal employment develops because of basic need. As populations rapidly grow countries have not been able to develop the educational and economy to provide jobs. The largest sector of formal jobs in LICs is the Government and Civil Service. With little formal work available and no social security to pay unemployment, disability and pension payments people have to rely on themselves and their own entrepreneuralism. The table below from the OECD shows the dominance of the informal sector in many countries. As you can see informal employment in some countries like Mali and Benin is over 90 percent.

The Location of Industry

The location of industry is linked to the specific needs of the company. Different industries require different inputs. Primary sector industries are of course bound by their natural resources and so locate in places  where the soil is fertile or forests are found or where the seam of coal is centered. Secondary sector industries are much more variable and many factors are important, including raw materials, final product, cost of labour, skills and productivity, government policy. An important factor is weight. Industries that make a product that gains weight or mass in the production process ar considered weight-gaining industries. These industries should locate close to the consumer market. Industries that are weight-losing need to save costs by locating close to the raw material. More modern manufacturing, which rely on both a light raw material and produce a light product are considered footloose and can locate freely where they choose. Many quaternary industries are considered footloose.They are not bound by raw materials. Finally the tertiary sector in providing a service needs to be either close to it consumer market or labour market. For example a hospital should be close to towns and call centre needs to be close to large suply of avilabel workers.

Activity
Where would you locate these four industries? 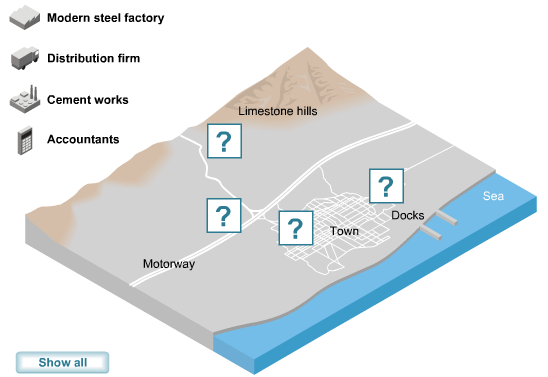 Activity
Where would you locate the following industries? For each one write a justification. 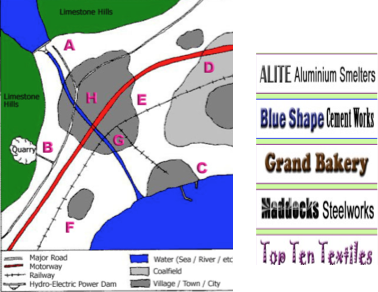 Other factors that influence where industries will locate include:

The location of Trans-National Corporations (TNCs) for manufacturing has shifted from HICs to LICs over the last 30 years. The global economy and global market has become much smaller due to technology innovation in transport and communication. Transport has become more intergrated through containerisation, super tankers are larger and faster than ever before and with a larger network of international airports the world is far better connected. These changes have made the transport of goods and trade much quicker and cheaper.
In comparison HICs struggle to attract TNCs. Their labour is costly, and due to government regulation, working conditions, hours of work and holiday and benefits make the costs unattractive. The only reason why TNCs choose to locate in HICS is due to the proximity to the consumer market and even then the process of choosing a suitable site often requires government intervention. In a recent new site development in Europe by Toyota a number of countries were considered. Belgium was ruled out because its government were to apathetic. France was ruled out because its labour market was too militant. The UK was considered too expensive but won the contract because the government provided so many incentives, such as grants for site development and tax reductions. Without the government intervention the site would have gone to Eastern Europe.

When an area de-industrialises it experiences a ecomomic decline. Industries close and people are made unemployed. This process dramatically impacts the community and a negative cycle of decline occurs. The follwing video shows the impact of this decline on the physical environment in South Wales. .
The following video captures the meloncholy of a previous time now changed, when the community was connected by the economic importance of the River Tyne in Newcastle. Newcastle was a centre for coal, steal and ship building. All of which was lost in the restructuring of the national economy. The song reflects a greater loss than just industry but also hints towards a brighter future. The following data on Newcastle put together by Charlotte Lemaitre shows the social and economic poverty that is the long term legacy of industrial decline in Newcastle.

The Location and Growth of the Tertiary and Quaternary Sector

Tertiary Sector
The Tertiary sector is increasing in all countries at all stages of development but it has advanced greatest in HICs. The growth of the tetiary sector is inversly related to the decline in the primary sector and proportional to increases in propserity and wealth. As countries develop and incomes rise people's spending pattern shifts to services. In addition, the growth of tertiary sector emplyment and the decline in primary and secondary setcor employment reduces the working hours and increases leisure time. Effectively people have more time to spend on services like trips out and holidays. The following video explains this change in the UK and the reduction in working hours
Activity
Describe and explain the location of call centers in the UK 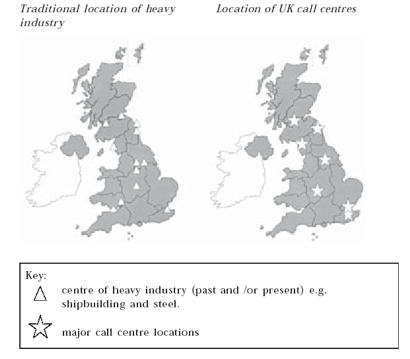 Another example of the growth of the tertiary sector relates to the regeneration of of industrial cities, like Newcastle Quayside and Cardiff Bay. Through investment in building design and iconic infrastructure, private investment is drawn in. Positive multipliers develop. As a consequence old run-down parts of the city have been turned into vibrant service centers with growth of apartments, bars, clubs and restaurants.
Quaternary Sector
As HICs develop further they have the advantage of both a highly educated and highly skilled workforce, advanced research facilities and a technology based economy. These three factors have caused the the growth of the quaternary sector. A quaternary industry is a high-tech company with a strong reliance on research and development. Today the quaternary industry is located predominantly in HICs. The UK is leading country with some of the highest concentration of high-tech companies in the UK. The following map shows the location of high companies in the UK. 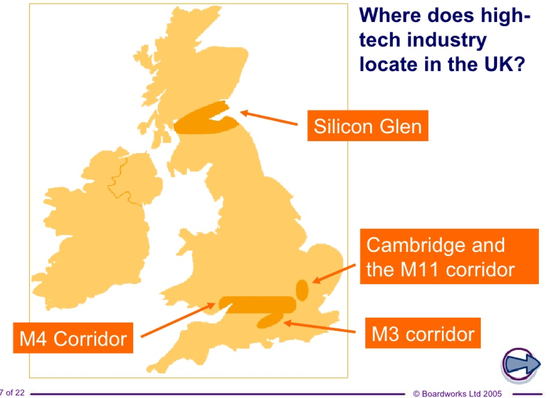 The M4 and M3 corridor has the highest concentration of high tech comapanies in Europe. The follwing map shows some of the Geography of the region.
Activity
What factors encourage the location of high-tech companies along the M4 corridor?

Case Study: The Location and Development of One High-Tech Company, imec, Leuven

Imec is located in Leuven, which is situated 30km east of Brussels and forms part of the Leuven, Eindoven, Aachen high-tech triangle. the following video explains it business.

Many factors have led to its growth. These include:
Powered by